Brad Lidge Net Worth: Brad Lidge is an American retired professional baseball player who has a net worth of $22 million. Brad Lidge was born in Sacramento, California in December 1976. Lidge was a relief pitcher who batted and threw right handed. He played baseball at the University of Notre Dame and won the Big East Conference player of the year award as a junior.

He was drafted #17 by the Houston Astros in the 1998 Major League Baseball Draft. Lidge played in the minor leagues before making his MLB debut for the Astros in 2002 where he played until 2007. He signed a one year deal worth $5.35 million with the Astros in 2007. Brad played for the Philadelphia Phillies from 2008 to 2011. In 2012 he signed a one year deal with the Washington Nationals worth $1 million. In 2013 he retired as a Phillie after signing a one day contract. During his career Lidge was a two time MLB All-Star. He recorded the final out and won a World Series Championship with Philadelphia in 2008. He was also named the National League Comeback Player of the Year and NL Rolaids Relief Man of the Year in 2008. Lidge finished his career with a record of 26 – 32 with 225 saves, 799 strikeouts, and an ERA of 3.54. 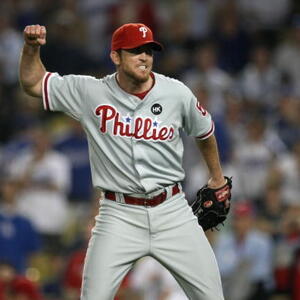