Bob Uecker net worth and salary: Bob Uecker is a retired American Major League Baseball player, sportscaster, comedian and actor who has a net worth of $10 million. He has been the play-by-play announced for the Milwaukee Brewers radio broadcasts since 1971.

Uecker was born and raised in Milwaukee, Wisconsin and grew up watching the minor-league Milwaukee Brewers at Borchert Field. As he grew older and became an impressive athlete, he signed a professional contract with the Milwaukee Braves and made his Major League debut was on April 13, 1962. During the course of his career, he played catcher for three different teams, the Braves (both Milwaukee and Atlanta), the Cardinals, and the Phillies. He was a below-average hitter, but was generally a sound defensive player who committed very few errors during his Major League career as a catcher. His final Major League game was in 1967 for the Atlanta Braves.

In 1971, after retiring as a player, he returned to his hometown and began working as a radio broadcaster; he still holds this position today. Uecker's sports knowledge extends beyond baseball and he has hosted two syndicated television shows throughout his career, Bob Uecker's Wacky World and Sports and Bob Uecker's War of the Stars. He has also appeared in a series of commercials throughout his career and has made appearances in television shows like Mr. Belvedere, Who's the Boss, D.C. Follies, and LateLine. A memorable film role was as the broadcaster for the Cleveland Indians in the Major League trilogy.

He has received several awards throughout his career, including being inducted into the National Radio Hall of Fame. He is known for his self-deprecating sense of humor and Johnny Carson gave him the nickname "Mr. Baseball" that stuck, as he is still known for that name today.

He was married to his wife, Judy, for twenty-five years. The couple had four children. They divorced in 2012.

Salary: Bob's estimated annual salary broadcasting for the Brewers is $2 million. In 2019 it was revealed that in the previous season when the Brewers made the playoffs, the team members voted to give Bob a full share off their Playoff bonus money. That worked out to $123,000 which Uecker then donated to several charities including the Make-A-Wish Foundation, Wounded Warriors and the Boys & Girls Club of Milwaukee. 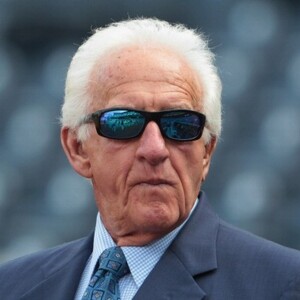