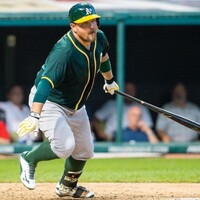 Billy Butler net worth: Billy Butler is an American professional baseball player who has a net worth of $20 million. Billy Butler was born in Orange Park, Florida in April 1986. Butler is a designated hitter and first baseman who bats and throws right handed. He played baseball at Wolfson High School and turned down a scholarship to the University of Florida. Butler was drafted #14 by the Kansas City Royals in the 2004 Major League Baseball Draft. He signed for a $1.45 million bonus. In the minor leagues he played for the Idaho Falls Chukars and was named Kansas City Royals Minor League Player of the Year. The following year he won the California League Rookie of the Year and Royals Minor League Player of the Year again. He played in the Texas League and was named the MVP of the 2006 All-Star Futures Game. He made his MLB debut for the Royals in 2007 and has played for them ever since. In 2011 he signed a four year deal with Kansas City worth $30 million. Butler was selected as an MLB All-Star and won a Silver Slugger Award the same year. In 2011 he won the Hutch Award.