Anthony Rizzo Net Worth: Anthony Rizzo is an American professional baseball player who has a net worth of $27 million. Anthony Rizzo was born in Fort Lauderdale, Florida, in 1989. The Boston Red Sox drafted him during the sixth round of the 2007 MLB Draft. He went through the Red Sox farm system before making his MLB debut on June 9, 2011 for the San Diego Padres.

He played for the Padres during the 2011 season before he was traded to the Chicago Cubs in 2012. As of the fall of 2014, Rizzo remains with the Cubs. The left-handed first baseman has a career batting average of .254 to go along with 405 hits, 71 home runs, and 215 runs batted in through the end of the 2014 season. He earned his first All-Star berth in 2014, the same year he won the Branch Rickey Award, given annually to a MLB player who has shown excellent service to his community. Rizzo decided to play with the Italian national team during the World Baseball Classic in 2013 to honor his family's Sicilian heritage, as they came from the town of Ciminna. He successfully beat a cancer diagnosis of Hodgkin's lymphoma that he received in May of 2008. 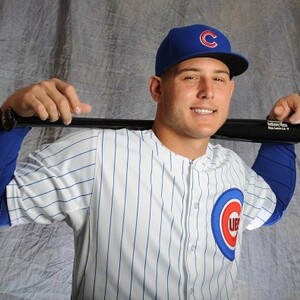