Anthony Rendon was born in Houston, Texas in June 1990. He is a third baseman who bats and throws right handed. He won many accolades playing at the Rice University including Conference USA Player of the Year, Baseball America's Freshman of the Year, and the Dick Howser Trophy. Rendon was drafted #6 overall by the Washington Nationals in the 2011 Major League Baseball draft. He made his MLB debut for the Nationals in April 2013. Anthony Rendon won the World Series with the Washington nationals in 2019 and was also an MLB All-Star and the MLB RBI leader in 2019. He was named the National League Comeback Player of the Year in 2016 and won the Silver Slugger Award in 2014 and 2109. During his first seven MLB season, Anthony Rendon had a .290 batting average with 136 home runs and 546 runs batted in.

Contract: Ahead of the 2020 season, Anthony signed a 7-year $245 million contract with the Los Angeles Angels. It is one of the 15 largest contracts in sports history. 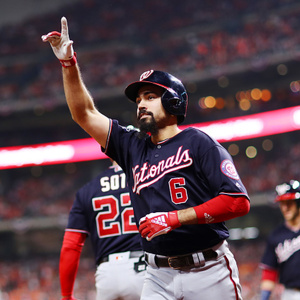