He played in the Venezuelan Summer League for two years and then missed the 2003 season with an elbow injury. He played for the Lowell Spinners, Portland Sea Dogs, and Wilmington. Sanchez was selected for the All-Star Futures Game in 2005. He was traded to the Florida Marlins and made his major league debut in Jun 2006. Sanchez played for the Florida/Miami Marlins until 2012 and was traded to the Detroit Tigers in 2012. On September 6, 2006 Anibel Sanchez pitched a no-hitter against the Arizona Diamondbacks. This ended the longest no-hitter drought in the history of Major League Baseball with more than 6,000 games played with a no-hitter since 2004. September 30, 2006 was officially named Anibel Sanchez Day. Sanchez was named American League ERA Champion in 2013 and holds a record for most strikeouts in a single game for the Detroit Tigers with 17. 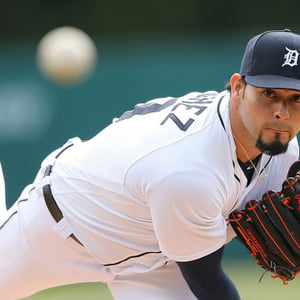