Angel Pagan Net Worth: Angel Pagan is a Puerto Rican professional baseball player who has a net worth of $20 million. Born in Rio Piedras, Puerto Rico, in 1981, Angel Pagan made his Major League Baseball debut on April 3, 2006 with the Chicago Cubs. He played with the Cubs until 2007 before joining the New York Mets from 2008 until 2011, and the San Francisco Giants in 2012.

He is presently still a member of the Giants after the end of the 2014 season. Through the 2014 season, Pagan has a .283 career batting average, 872 hits, 49 home runs, 322 runs batted in, 149 stolen bases, and an on base percentage of .334. Pagan led the National League in triples in 2012 and is a two-time World Series champion with the Giants in 2012 and again in 2014. Nicknamed "El Caballo Loco", the outfielder is a switch hitter who throws right-handed. He played with the Puerto Rican national team during the World Baseball Classic in 2013. He made off-the-diamond headlines for a 2009 arrest for traffic violations; originally pulled over for speeding, officers found several outstanding warrants for traffic fines for Castillo. Castillo and his wife, Windy, have two daughters together: Suil Angelina and Briana. 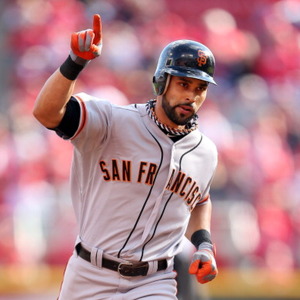