He signed with the University of Florida but was drafted #11 by the Pittsburgh Pirates in the 2005 MLB Draft. McCutchen made his major league debut for the Pittsburgh Pirates in June 2009 and has played there his entire career. He is a four time MLB All-Star from 2011 to 2014. He won a Gold Glove Award in 2012 and Silver Slugger Awards in 2012 and 2013. In 2013 he was named the National League Most Valuable Player. McCutchen finished first in hits and second in NL batting average in 2012. In 2012 he signed a six year contract extension worth $51.5 million with the Pirates. Andrew is known for his dreadlocks and proposed to his girlfriend in 2013 on The Ellen DeGeneres Show. 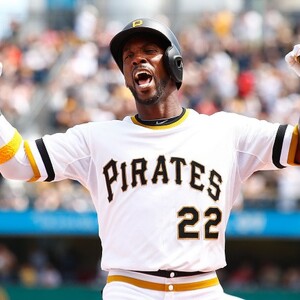