Andre Ethier Net Worth and Salary: Andre Ethier is a retired American professional baseball player who has a net worth of $40 million. Andre Ethier was born in Phoenix, Arizona in April 1982. Ethier is an outfielder who bats and throws left handed. He played for Arizona State University and Chandler-Gilbert Community College where he was named team MVP.

He played in the New England Collegiate Baseball League and inducted into the NECBL Hall of Fame. He was selected by the Oakland Athletics in the 37th round of the 2001 amateur draft. Andre elected to play for ASU and was again drafted by the Athletics in 2003. Ethier played for the Vancouver Canadians, Kane County Cougars, Modesto Athletics, Midland RockHounds, and Sacramento Rivercats. He was traded by the A's to the Los Angeles Dodgers in 2005. His major league debut came in 2006. Ethier won a Silver Slugger Award in 2009 and a Gold Globe Award in 2011. He was an All-Star in 2010 and 2011. He hit six walk-off hits in 2009 which was the most by any player since 1974. He also tied a record for most walk-off home runs in a season with four. These late-inning heroics have earned Ethier the nickname of Captain Clutch. Andre retired after the 2018 season. 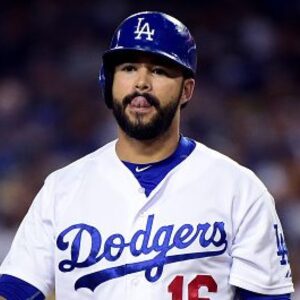