Alfonso Soriano net worth: Alfonso Soriano is a Dominican professional baseball player who has a net worth of $60 million dollars. Alfonso Soriano was born on January 7, 1976 in San Pedro de Macoris, Dominican Republic. He began his baseball career with Hiroshima in 1996-1997 then signed with the New York Yankees as a free agent in 1998, where he played for five seasons as an infielder, a third baseman and finally a second baseman.

In 2002, Soriano became the second Yankee player in franchise history to record 30 home runs and 30 stolen bases in the same season, then repeated the feat in 2003. In 2002, he also led the American League with 696 at bats, 209 hits, 92 extra base hits, 41 stolen bases, 128 runs and set a Yankees' team record for most at bats (696) and most strikeouts (157) in a season. In 2003, Soriano set the record for most home runs (13) to lead off a game in a season, for the second straight year led the league in at bats and finished in the top five for base hits, doubles, home runs, stolen bases and strikeouts. He was traded to the Texas Rangers in 2004, where he spent only one year. He was traded to the Washington Nationals in 2005 and made his fifth consecutive All-Star team and became the third man ever to start All-Star games for both leagues at two different positions. The Chicago Cubs signed Soriano to an eight-year contract (2007-2013) where he was hit by a ball during a pitch in 2008, breaking a bone in his hand. He also underwent arthroscopic surgery on his left knee in 2009. In 2013, The Cubs traded him to the New York Yankees and within one month he recorded his 2,000th career hit-a home run off of Detroit Tigers' pitcher Justin Verlander. 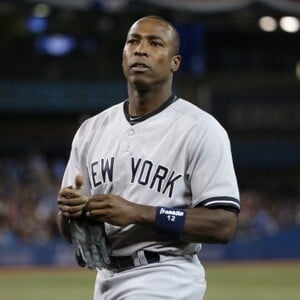