Alex Gordon net worth and salary: Alex Gordon is an America professional baseball player who has a net worth of $24 million. Alex Gordon was born in Lincoln, Nebraska in February 1984. He is a left fielder and third baseman who bats left and throws right handed. At Lincoln Southeast High School he was a two time Gatorade Nebraska Player of the Year.

He represented the United States at the 2004 World University Championship where they won the Gold medal. Gordon played at the University of Nebraska. In his junior year he won the Dick Howser Trophy, Golden Spikes Award, Brooks Wallace Award, and the ABCA Rawlings Player of the Year. Baseball American named Gordon the #1 college draft prospect. Alex was drafted #2 by the Kansas City Royals in the 2005 MLB Draft. He made his Major League Baseball debut for the Royals in 2007 and has played with them ever since. Gordon is a three time Gold Glove Award winner from 2011 to 2013. He was also selected as an MLB All-Star in 2013 and 2014. In 2012 he was the MLB Doubles Leader. He was featured on a Topps baseball card in 2006 that was issued prematurely and the card has gone for thousands of dollars on eBay. 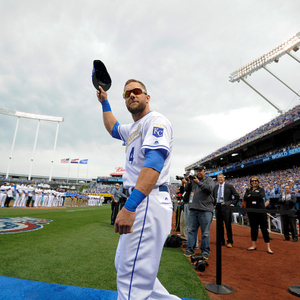