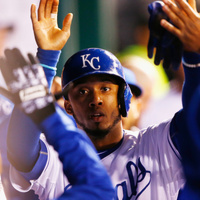 Alcides Escobar Net Worth: Alcides Escobar is a Venezuelan professional baseball player who has a net worth of $12 million. Alcides Escobar was born in La Sabana, Venezuela in December 1986. Escobar is a short stop who bats and throws right handed. Alcides started playing baseball at four years old and idolized Omar Vizquel. Alcides' first cousin Kelvim Escobar was a MLB pitcher. At 16 years old he was signed by the Milwaukee Brewers as an international free agent for $35,000 in 2003. He spent 2007 in the minor leagues before making his Major League Baseball debut for the Brewers in 2008 where he played through the 2010 season. Escobar was traded to the Kansas City Royals in December 2010. In 2012 he signed a four year extension worth $10 million. The contract included club options for 2016 and 2017 that could increase to $21.75 million. He made $1 million in 2012 and $3 million a year from 2013 to 2015. Through the 2014 season Escobar has 782 hits, 21 home runs, and 252 runs batted in. He has stolen 128 bases and has a batting average of .263.