Albert Pujols Net Worth and Salary: Albert Pujols is a Dominican-born professional baseball player who has a net worth of $170 million. Ever since Pujols made his debut in the MLB, he has been widely considered one of the greatest hitters and most consistent players in the league. Albert has been named the National League MVP three times, is a ten-time All-Star, and has won two World Series rings.

Early Life: Pujols was born on January 16th of 1980 in Santo Domingo, Dominion Republic. He was raised mostly by his grandmother, uncles, and aunts. His father, Bienvenido Pujols, was a softball player but also struggled with alcohol. As a kid, Albert practiced baseball using limes for balls and a milk carton as a glove. In 1996, he immigrated to New York City with his father and grandmother. Shortly after arriving, Pujols witnessed a convenience store shooting, prompting the family to relocate to Independence, Missouri.

Albert played baseball at Fort Osage High school and was named an All-State athlete twice. As a senior, teams were so scared of his hitting that they walked him 55 times. Pujols graduated high school one semester early and then went to Maple Woods Community College on a scholarship. He finished his freshman season with a .461 batting and entered the Major League Baseball draft.

Career: Albert was selected 402nd overall in the 1999 MLB draft by the St. Louis Cardinals. After accepting a $60,000 signing bonus, he played on the Cardinals' minor league team for a season. In 2001, Albert moved to the Cardinals' major league team. He finished his rookie season with 37 home runs and was named the National League Rookie of the Year. The Cardinals made it to the postseason, although they were eliminated in the first round.

In 2002, Pujols finished the season in the top-ten in every significant batting statistic in the NL. He became the first player in major league history to hit over .300 with at least 30 home runs, 100 RBI, and 100 runs scored in his first two seasons. He was voted second for the league's MVP. The team advanced to the 2002 NL Championship Series but lost to the San Francisco Giants.

In 2003, Albert was voted into the All-Star Game, which would mark the first of eight straight seasons to reach the game. Pujols again finished second in the voting for the league's MVP. That season, he tied Ralph Kiner for the most home runs in their first three seasons with 114.

In 2004, Albert signed a seven-year contract extension worth $100 million. He had numerous stand-out games and continued to perform at the highest level despite being diagnosed with plantar fasciitis. The Cardinals made the postseason and advanced to the World Series for the first time since 1987. They were swept in four games by the Boston Red Sox. Pujols hit his 200th career home run the following season, making him the third-youngest player to reach that milestone.

In 2006, Albert again finished second in MVP voting. He won the NL Gold Glove Award, as the Cardinals reached the playoff for the third straight year. They advanced to the World Series, where they faced the Detroit Tigers. Pujols hit a game-winning home run in the first game, and the Cardinals went on to win 4-2, giving Albert his first World Series ring.

In 2007 and 2008, Pujols earned his second NL MVP Award, and The Sporting News named him the Player of the Year for the second time in his career. When asked about his impressive home run statistics, he said, "just another homer that goes out of the park. I'm happy to do it in front of our fans—they were waiting for it." In 2009 and 2010, he recorded several career-high stats and won the Silver Slugger Award for the fifth and sixth time in his career.

In 2011, Albert and the Cardinals returned to the playoffs. Pujols struggled during the first half of the season; however, a New York Times writer said, "Even when Pujols struggles, he excels." The Cardinals reached the World Series, where they defeated the Texas Rangers. In Game Three, Albert hit three home runs, joining Babe Ruth and Reggie Jackson as the only players in history to hit three home runs in a World Series game.

In 2012, Pujols signed a ten-year deal with the Los Angeles Angels worth around $254 million. He started the season off slow but eventually bounced back. In 2013, Albert suffered a foot injury partway through the season and could not return. In 2014, he became the third-youngest player to hit 500 home runs, and in 2015 he was selected to the All-Star Game.

Pujols continued to play with the Los Angeles Angels, although he never achieved the same success as he did earlier in his career with the Cardinals. At the beginning of the 2020 season, at the age of 40, Albert was the oldest player in the MLB. In September, he hit his 662nd home run, giving him fifth place all-time.

Relationships: Pujols is married to his wife, Deidre. They have five children together, Albert Jr., Sophia, Ezra, Esther Grace, and Isabella.

Real Estate: In 2016, Pujols listed his 9,200-square-foot mansion in Irvine, CA for sale at $7.75 million. The home was built in 2010 in a Spanish Colonial-style. The house is entered through a gated courtyard with a fountain and features a rotunda entry with a winding staircase. The rustic house features a center-island kitchen, formal living and dining rooms, five bedrooms, six bathrooms, and one half-bathroom. Albert originally purchased the home in 2012 for $5.55 million.

Albert Pujols Salary: Albert Pujols' peak salary with the Cardinals was $14.5 million. His last contract with St. Louis paid $100 million over seven years. His peak base salary with the Angels was $28 million. At the height of his career he earned an additional $7 million a year from endorsements. On December 8th, 2011 Albert Pujols signed a contract with the Los Angeles Angels of Anaheim which would pay him $254 million over 10 years. At the time of signing the contract was the second biggest in baseball history behind Alex Rodriguez's 10-year $275 million deal with the New York Yankees. Pujols' contract is only the third in baseball history to crack the $200 million mark. Click here to check some of the highest paid baseball players in the game. Between June 2017 and June 2018, Albert Pujols earned $30 million between salary and endorsements, the vast majority of which came from salary. 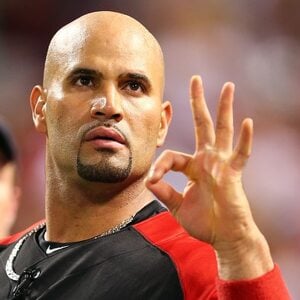