Albert Belle Net Worth: Albert Belle is an American retired professional baseball player who has a net worth of $25 million. Albert Belle was born in Shreveport, Louisiana in August 1966. He was an outfielder who batted and threw right handed. He attended Huntington High School and played for the USA in the Junior Olympics and won a silver medal.

He attended Louisiana State University on a baseball scholarship and then was drafted by the Cleveland Indians. He made his major league debut for the Indians in July 1989 and played for Cleveland until 1996. He played for the Chicago White Sox from 1997 to 1998 and the Baltimore Orioles from 1999 to 2000. During his career Belle was a five time All-Star from 1993 to 1997. He also won five Silver Slugger Awards from 1993 to 1996 and in 1998. In 1993 he was the American League home run champion and he was also a three time AL RBI Champion in 1993, 1995, and 1996. He was the first player who hit 50 home runs and 50 doubles in a single season in 1995. Belle also became the first player to make more than $10 million per year in MLB. During his career, he earned $97 million in salary alone before taxes and various other fees. 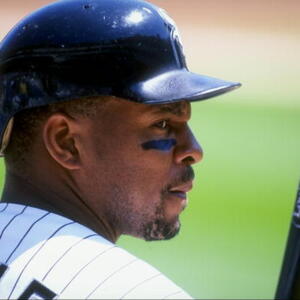