A.J. Burnett Net Worth and salary: A.J. Burnett is an American professional baseball player who has a net worth of $45 million dollars. A.J. Burnett was born in North Little Rock, Arkansas, in 1977. The New York Mets selected him in the eighth round of the 1995 amateur draft before he was dealt to the Florida Marlins after the 1997 season.

He made his major league debut in 1999, but wasn't a regular pitcher in the rotation until 2001. Burnett finished that season with a 4.05 ERA and 11-12 record. He pitched his first no-hitter that season on May 12, 2001, in a 3-0 win over the San Diego Padres. In 2005, the Marlins asked him to leave the team a day after he made disparaging remarks about the franchise and Burnett entered free agency. The Toronto Blue Jays signed him to a five-year, $55 million deal despite injury concerns, though Burnett eventually opted out of his contract in 2008 to sign with the New York Yankees. He was traded by the Yankees to the Pittsburgh Pirates and eventually inked a deal with the Philadelphia Phillies in early 2014. Burnett helped guided the Yankees to a 2009 World Series championship. As of early 2014, he has a 153-140 record, 3.98 ERA, and 2,288 career strikeouts. Burnett has two children with his wife, Karen, and suffers from Gilbert's syndrome. A.J. Burnett's annual salary is $16.5 million. In 2008 he signed Burnett signed an 8 year $82 million contract with the New York Yankees. In 2012 he was traded to the Pittsburgh Pirates. He then played for the Phillies during the 2014 season. He signed a one year deal with the Pirates for the 2015 season. 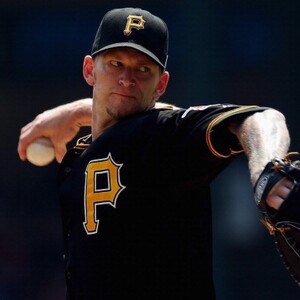