Adrian Gonzalez net worth and salary: Adrian Gonzalez is a retired Mexican-American professional baseball player who has a net worth of $100 million. During his major league career, Adrian earned $190 million in salary alone. His peak annual salary was $22.357 million which he earned three seasons in a row, 2017 through 2018.

Adrian was born on May 8, 1982 in San Diego, California. Gonzalez played for Mexico in the 2006 and 2009 World Baseball Classic tour. And his has earned the nickname Gonzo and A-Gon. Adrian attended Eastlake High School in Chula Vista, California where he excelled at baseball and was projected to be a late first-round pick in the 2003 draft. In June 2003 Gonzalez was drafted first overall and given a $3 million signing bonus by the Florida Marlins. He was a member of the Florida Marlins from 2000- until 2003. He then played for the Texas Rangers (2004–2005), and then San Diego Padres (2006–2010. He joined the Boston Red Sox in 2011 when he signed a seven year $154 million contract.

In 2019 they paid $10.5 million for a different Hancock Park home which they still own today. They also own a $10 million mansion in La Jolla, California which was acquired in the early 2010s.

In July 2020 they paid $4.4 million for a home in LA's Beverly Park neighborhood. For some reason, Adrian listed this home for sale just four months later for an optimistic $4.7 million. 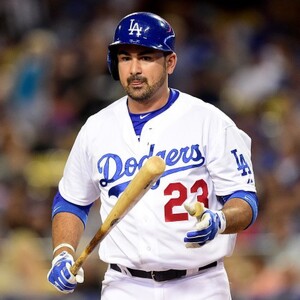