Adam Wainwright Net Worth: Adam Wainwright is an American professional baseball player who has a net worth of $55 million. Adam Wainwright was born in Brunswick, Georgia in August 1981. Adam is a starting pitcher who bats and throws right handed. He attended Glynn Academy and was named Gatorade Georgia Player of the Year in 2000.

He was drafted #20 by the Atlanta Braves in the 2000 MLB Draft and his contract included a $1.25 million bonus. He played for the Danville and Macon Braves and played in the All Star Futures Game in 2002. Wainwright was named the Braves top prospect by Baseball America in 2003. He was acquired in a trade by the St. Louis Cardinals in 2003. He made his MLB debut in 2005 and made the Cardinals' 2006 opening day roster as a relief pitcher. Adam has a two time World Series Champion with the Cardinals in 2006 and 2011. He has been named an All-Star in 2010, 2013, and 2014. He won Gold Glove Awards in 2009 and 2013 and was also the National League wins leader for those years. Wainwright has also been a NL Pitcher of the Month and Player of the Week. He has finished in the top three in Cy Young balloting three times. He is second to Bob Gibson for most strikeouts in Cardinals franchise history. 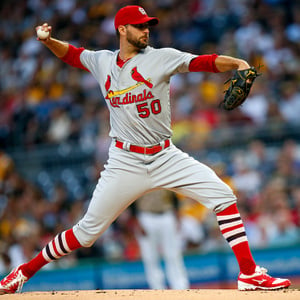