Adam LaRoche Net Worth: Adam LaRoche is an American professional baseball player who has a net worth of $35 million. Born in Orange County, California, in 1979, Adam LaRoche played at Seminole Community College in Oklahoma. The Florida Marlins chose him during the 1998 and 1999 drafts, though he wouldn't sign with the team.

He finally chose to sign with an MLB team when the Atlanta Braves chose him in 2000. LaRoche worked his way through the Braves' farm system before making his professional MLB debut on April 7, 2004. He played with the Braves until he was traded to the Pittsburgh Pirates in early 2007. During the summer of 2009, he was dealt to the Boston Red Sox for six games before being traded back to his original franchise. LaRoche landed a one-year, $4.5 million deal with the Arizona Diamondbacks in January of 2010 and later a two-year deal with the Washington Nationals in 2011. LaRoche earned a two-year, $24 million contract with the Nationals two years later in early 2013. As of the fall of 2014, he currently plays first base in D.C. LaRoche was part of the Topps All-Star Rookie Team in 2004 and won a Gold Glove Award and a Silver Slugger Award in 2012. Through June 2014, he has amassed a .244 career batting average, 1,295 hits, 225 home runs, 783 runs batted in, and 669 runs scored. He has two children with his wife, Jennifer. He has publicly discussed his battle with ADHD. LaRoche gained notoriety in May of 2009 for becoming the first player ever in MLB to have his home run reversed by video replay. 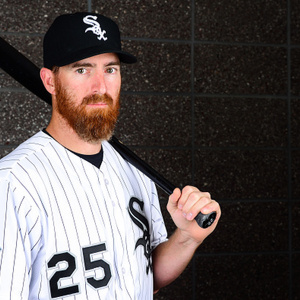