Adam Jones Net Worth: Adam Jones is an American professional baseball player who has a net worth of $45 million. Adam Jones was born in San Diego, California in August 1985. Jones is an outfielder who bats and throws right handed. He played baseball for Morse High School and was drafted #37 by the Seattle Mariners in the 2003 MLB Draft.

He was drafted as a pitcher and shortstop but moved to the outfield. He played for the Tacoma Rainiers before making his major league debut in July 2006 for the Mariners. Jones was traded to the Baltimore Orioles in 2008. He signed a six year contract extension worth $85.5 million in 2012. Jones has been selected as an All-Star four times in 2009 and from 2012 to 2014. He is a three time Gold Glove Award winner in 2009, 2012, and 2013, and also won a Silver Slugger Award in 2013. As of September 2014 Jones has over 1,140 hits and 160 home runs. In 2010 he was detained at the Canadian border after being mistaken for former NFL player Adam "Pacman" Jones. 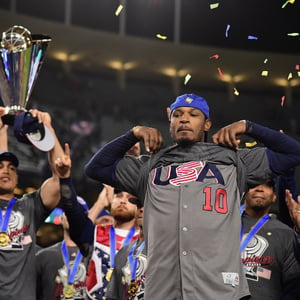