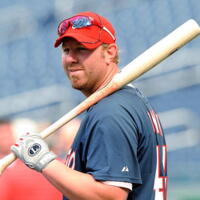 Adam Dunn net worth and salary: Adam Dunn is an American professional baseball player who has a net worth of $45 million. Adam Dunn was born in Houston, Texas in 1979 and, also known as "Big Donkey," is well known for his roles as first baseman, outfielder and designated hitter in Major League Baseball. Though he was a Texas high school quarterback before being drafted in the second round of the Major League Baseball Draft in 1998, Dunn began his run in the MLB with the Cincinnati Reds in 2001 and joined the Arizona Diamondbacks in 2008. From there, he played with the Washington Nationals from 2009 to 2010, and currently plays for the Chicago White Sox, whom he joined in 2011. His international baseball career has taken him across the Canadian border where he played with the United States team in the World Baseball Classic. Dunn was deemed an All-Star in both 2002 and 2012 and was awarded the title of TSN AL Comeback Player of the Year in 2012. Dunn bats left, throws right, and has a batting average of .238. He has reached 1,537 hits; 440 home runs; 1,104 runs batted in; 2,220 strikeouts; and 1,246 walks in his twelve years as a major league player. Adam Dunn is currently married to Rachel Brown, and they have one son together named Brady.