What is Aaron Judge's net worth and salary?

Aaron Judge is an American professional baseball player who has a net worth of $50 million. On October 4, 2022 Aaron Judge broke Roger Marris' American League single-season home run record when he blasted his 62nd home run against the Texas Rangers. Aaron Judge is an outfielder who bats and throws right handed. He was a three sport star at Linden High School and was drafted in the 31st round of the 2010 draft by the Oakland Athletics but chose to play college baseball at Fresno State where he received many awards and won the 2012 TD Ameritrade College Home Run Derby. Judge was again drafted #32 by the New York Yankees in the 2013 Major League Baseball Draft. He made his MLB debut for the Yankees in 2016 and has spent his entire career with the organization.

Between 2016 and 2022 Aaron earned $40 million in MLB salary alone. He became a free agent upon the conclusion of the 2022 season. Before the 2022 season began Aaron was offered a 7-year, $213.5 million extension from the Yankees. He rejected this offer, opting instead for a 1-year $19 million deal. As you know, Aaron went on to break the AL single-season home run record during the 2022 season. This set him up for being a free agent coming off one of the best seasons of baseball in history.

On December 7, 2022, after months of speculation and a rumored rival offer from the SF Giants, Aaron Judge ended up signing a 9-year $360 million contract with the NY Yankees. If you'll recall from a moment ago, he rejected 7-years at $213.5 million a year earlier. So by being patient and betting on himself, Aaron earned himself an extra $146.5 million.

Aaron Judge has a number of lucrative endorsement deals notably with Pepsi and Adidas. From 2014 to 2018 he was an Under Armour athlete. 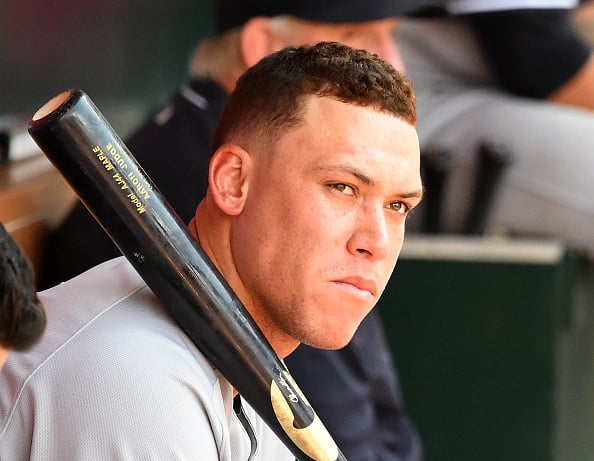 Aaron Judge was born in Linden, California in April 1992. He was adopted the day after he was born by Patty and Wayne Judge, two teachers. He has never met his birth parents and he has an older brother named John who was also adopted. John teaches English in South Korea. As a child he was a fan of the San Francisco Giants.

Eventually growing to 6 foot 7 and 282 pounds, he was a three-sport star athlete at Linden High School, playing baseball, basketball and football. His baseball team made it to the state Division III playoffs. He set single-season records at the school for touchdowns and receiving yards.

Aaron was not just an athlete, he graduated with a 3.2 GPA, served on student council and volunteered around town for various community service.

He was recruited by over a dozen colleges for football but chose to focus instead on baseball. In 2010, when he was 18 and still in high school, Aaron was drafted by the Oakland Athletics in the 31st round of the 2010 amateur draft. Aaron instead chose to attend Cal State, Fresno.

During his sophomore year the team won the Western Athletic Conference title. The following season he led his team in RBIs, doubles and home runs.

Aaron was selected in the first round of the 2013 MLB draft as the 32nd pick. He soon signed a deal with the Yankees that came with a $1.8 million signing bonus. Unfortunately a muscle tear prevented Aaron from playing in the 2013 season.

Aaron played for a variety of minor league teams before making his professional debut in August 2016. He started as a right fielder in a game against the Tampa Bay Rays. In his very first at-bat in the big leagues Aaron hit a home run. In an interesting twist, the hitter right before him ALSO hit a home run in his first MLB at-bat. Aaron played 27 games in his debut season, ending the year with a .179 batting average.

In the 2022 season Aaron gained widespread fame after hitting 62 home runs which topped Roger Maris' record of 61. In order for Aaron to fully cement himself in the record books he will have to surpass the following home run records:

*It is generally believed that all of the above athletes were using some form of performance enhancing drugs when their respective records were set.