Aaron Hill Net Worth: Aaron Hill is an American professional baseball player who has a net worth of $24 million. Aaron Hill was born in Visalia, California in March 1982. He is a second baseman who bats and throws right handed. He was drafted by the Anaheim Angels in the 2000 MLB Draft but turned down the offer and attended Louisiana State University. He was against drafted in 2003 at #13 by the Toronto Blue Jays. Hill made his MLB debut in 2005 for the Blue Jays where he played until 2011. He was selected as an All-Star in 2009 and also was awarded the American League Comeback Player of the Year and the TSN AL Comeback Player of the Year. Hill was traded to the Arizona Diamondbacks in 2011 and has played there since. Hill won Silver Slugger Awards in 2009 and 2012 and Fielding Bible Awards in 2007 and 2009. During the 2012 season Hill hit for the cycle twice in June against the Seattle Mariners and the Milwaukee Brewers. He became the fourth player in MLB history to hit for the cycle twice in one season. 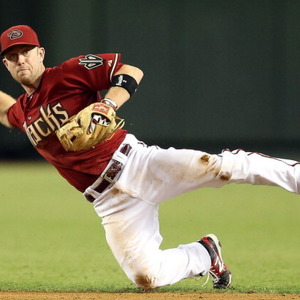