Ramon Dominguez net worth: Ramon Dominguez is a Venezuela born Eclipse award winning champion jockey who has a net worth of $40 million. Ramon Dominguez has earned his net worth in American Thoroughbred horse racing. Ramon was born on November 24, 1976 in Caracas, Venezuela. He began riding horses at age 16 in his native home of Venezuela.

Ramon specialized in the field of show jumping then turned to riding thoroughbreds in many flat racing events. He immigrated to the United States in 1996, and began riding at the Florida's Hialeah Park Race Track. In 200, he had become the winningest jockey in the United States, a he repeated he feat in 2003. In 2004 he had the highest winning percentage among all American-based jockeys and therefore won the Isaac Murphy Award. He is the regular rider of two-time Eclipse Award-winning turf champion Gio Ponti. Ramon has ridden this prize horse to victories in six Grade One stakes races including the Belmont Park's Man o' War Stakes twice, and the Manhattan Handicap, Arlington Million, Frank E. Kilroe Mile Handicap. His very first win was at the Breeder's Cup in 2004 when he rode Better Talk Now to victory in the Breeder's Cup Turf. On two different occasions he has won six races in one day. On June 5, 2011 he rode six winners from eight mounts at Belmont Park, which tied the same day win record. This win makes him the second jockey in Belmont Park's history to win six races on a single race card. In addition he also won five races in a day on several occasions at Aqueduct Racetrack including on February 17, 2010 when he won the first five races on the card. Dominguez was the recipient of the 2010 Eclipse Award for Outstanding Jockey. 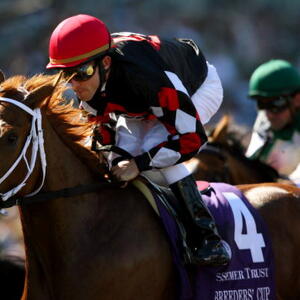