What is Valentino Rossi's net worth and career earnings?

Valentino Rossi was born on February 16, 1979 in Urbino, Italy. Born to a racer father, Graziano Rossi, Valentino followed in his father's footsteps and started racing on a go-kart at a very young age. His dad replaced the 60cc motor on his kart with a 100cc national kart motor when his son was just 5 years old. Rossi won the regional kart championship in 1990 and took up minimoto. By 1991, he had already won numerous regional races. In 1995, Valentino won the Italian 125 CC Championship and placed third in the European Championship.

Rossi started racing in Grand Prix in 1996 for Aprilia in the 125cc category. The following year he won his first World Championship, after which he moved up to the 250cc category with Aprilia and came out the winner of the 250cc World Championship in 1999. In 2000, he graduated to the premier class and won the 500cc World Championship with Honda, as well as the MotoGP World Championships (also with Honda) in 2002 and 2003. Rossi continued his line of back-to-back championships with the acquisition of the 2004 and 2005 titles after leaving Honda for Yamaha. Rossi lost the 2006 title due to a crash in the final round at Valencia and ceded his title to his former Honda teammate Nicky Hayden. In 2007, Rossi and Yamaha were defeated to dominant Casey Stoner on a Ducati. Rossi finished the year at a then career-low of third overall.

Rossi reclaimed the title in 2008 and retained it in 2009, following several close duels with Stoner. For the 2011 season and marred by a broken leg, Rossi left Yamaha to join Ducati, but in 2012, due to two winless seasons with Ducati it was already officially confirmed that he would get back to Yamaha for the 2013 and 2014 seasons. Upon his return to Yamaha, Rossi finished fourth in the standings in 2013 and followed that up with three consecutive runner-up positions for three years following. He also led the championship for the vast majority of the 2015 season, eventually being surpassed by team colleague Jorge Lorenzo in the final round at Valencia. Rossi lost out as a result of a grid penalty sustained for a crash with Honda rider Marc Marquez in the Malaysian round. During his second stint with Yamaha, Rossi has won several races but has not experienced the same level of success he did in the earlier part of his career. He won the 2017 Dutch TT, and finished third n the 2018 championship, but a losing streak followed for multiple years. As of 2020, he is contracted to race until the end of the year but it is confirmed that he will leave Yamaha at the end of 2020. He has been in talks to join Petronas Yamaya Racing Team for the 2021 season. Rossi is also a team owner of junior class team Sky Racing Team by VR46.

When it comes to 500cc/MotoGP multiple champions, Rossi is second of all time with 105 race wins, right behind Giacomo Agostini who has 122. Valentino earned $34 million in 2007 and $36 million in 2008. He is one of the highest-earning sports figures in the world, according to Sports Illustrated. In 2009, he was ranked as No. 9 among the world's highest-paid athletes. 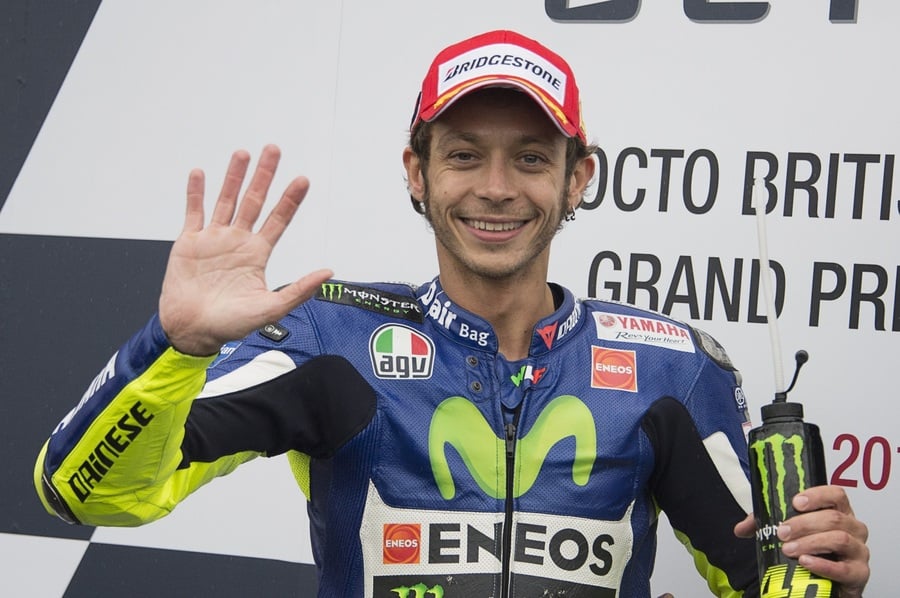 Rossi experimented and tested out Ferrari Formula One car racing in February 2006, and was invited to move to Formula One and begin competing immediately. However, he announced in May that year that he would be staying in MotoGP until he felt his work on the motorbike was "finished." Besides his interest in Formula One, he is passionate about racing rally cars. He participated in the 2002 WRC Rally Great Britain in a Peugeot 206 WRC, which he crashed in the second stage of the race. In November 2006, he raced in Rally New Zealand in a Subaru Impreza WRC04. That same year, he won the Monza Rally Show in a Ford Focus RS WRC 04. At the 2007 Monza Rally, Valentino took first place. He again decided to remain in MotoGP.

In January 2010, Rossi stated that he hoped to move into rally once he retires from motorcycle racing. In 2013, he was given a special test of Kyle Busch's NASCAR Nationwide Series stock car at Charlotte Motor Speedway in North Carolina. Rossi raced at a top speed of 185 MPH, a speed that would have put him in the top fifteen if it had been a Nationwide Series race. In 2019, Rossi swapped rides with six-time Formula One world champ Lewis Hamilton as part of a sponsored event at Circuit Ricardo Tormo in Spain. Later that week, he competed in the 2019 Gulf 12 Hour at Yas Marina Circuit in a Ferrari 488 GT3. His co-drivers were his half brother and fellow Moto2 rider Luca Marini and Alessi Salucci. They set the team's fastest lap time and secured seventh place overall in the first half, and Rossi took the car to an overall 3rd place and a win in the Pro-Am class in the final lap.

Rossi moved to Milan when he was 18 and then took up residency in London, England, during his period with Honda. Sometime in between, he acquired a villa in Ibiza. Following a 2007 tax case, he returned to live close to his family in Italy. In May 2005, Rossi received an honorary degree in Communications and Advertising. Since 2019, he has dated Italian model Francesca Sofia Novello.

In 2007, Rossi was accused by Italian tax authorities of not declaring $160 million of earnings between 2000 and 2004. He had previously been investigated for tax evasion in 2002, unsuccessfully. Officials claimed that against the European Taxes Agreement among European countries, Rossi's London residency had enabled him to take advantage of tax conditions in his favor, for instance only declaring earnings he made in England and avoiding taxes on his merchandising and sponsorship contracts. Authorities declared during the thorough investigation that while Rossi technically was a resident of London, his "center of interests" was not there. In February 2008, Rossi announced that they had settled the case for 35 million euros (around $41 million USD) to avoid possible jail time. 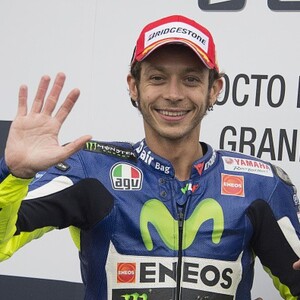