He began competing in the NHRA Top Fuel class in 1996 and drivers the U.S. Army dragster. He broke a record in 1999 when he was the first driver to exceed 330 miles per hour during competition. Tony Schumacher won the championships for six years in a row from 2004 to 2009. He also won in 1999 and 2014. During his career he also has more than 80 wins and 60 poles. His 2008 season was the most dominant in Top Fuel of all time when he won 15 events including seven in a row. He drives for his father's multi-team organization and has earned the nickname "The Sarge". 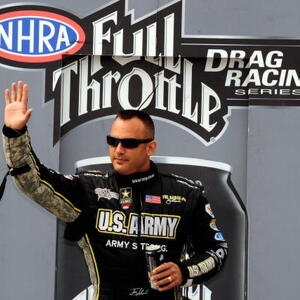