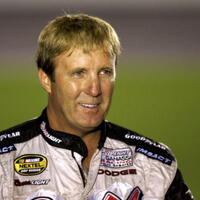 Sterling Marlin net worth: Sterling Marlin is an American stock car driver who has a net worth of $40 million dollars. Sterling Marlin was born in Columbia, Tennessee, and made his NASCAR debut when he was 19 years old, filling in for his injured father. The race was unsuccessful due to car problems, but it showed that he could hold his own. Within two years, he was securing Top Ten finishes, and in 1983 received the Rookie of the Year Award. Over the course of the next seven years, he raced for multiple teams, slowly rising up the ranks of drivers, and establishing himself as a solid driver. He won the Daytona 500 in 1994 and 1995. He raced moderately well through the late 80s, but then seemed to hit his stride again after his team switched to racing with Dodge Intrepids. He was involved in an accident with Dale Earnhardt that led to Earnhardt's death. Fan backlash was so strong, that the Earnhardt family came forward to make it clear that he was not the cause of Earnhardt's death. He retired in March of 2010, after racking up 10 wins, 216 Top Tens, and 11 poles in the NASCAR Sprint Cup Series and 2 wins, 22 Top Tens, and 1 pole in the Nationwide Series.