Ryan Hunter-Reay net worth: Ryan Hunter-Reay is an American race car driver who has a net worth of $5 million. Ryan Hunter-Reay was born December 18, 1980 in Dallas Texas. He is probably most famous for being the winner of the 2014 Indy 500. He currently races for Andretti Autosport. During his career he has won all three of North America's top open wheel formulas including the IndyCar Series, the Champ Car World Series and CART.

He was the IndyCar Series rookie of the year for 2007 and Indy 500 rookie the year 2008. Ryan races car #28 which is a nod to the estimated 28 million people living with cancer at any given time around the world. He is married to former racer and current pit reported/model Beccy Gordon. They married on July 2, 2011 and welcomed their first son, appropriately named "Ryden", on December 28, 2012. As of this writing, in the Indy series Ryan Hunter-Reay drives a Honda engine car with a Dallara chassis for Andretti Autosport. During his previous two years with Andretti he drove a Chevy engine. 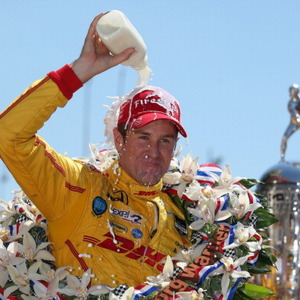