Ryan Dungey net worth: Ryan Dungey is an American professional motocross racer who has a net worth of $8 million. Ryan Dungey has earned his net worth as a professional motocross racer in both the AMA Supercross and Motocross championships. Ryan was born on December 4, 1989 in Belle Plaine, Minnesota and he currently lives in Tallahassee, Florida, he currently rides with 15-time AMA Champion Ricky Carmichael. In the 2011 nationals has won 3 overalls and trails season points leader Ryan Villopoto by just 7 points. Some of Duney's accomplishments include; the 2010 FIM Motocross of Nations Champion (Team USA & Overall MX1-class), the 2010 AMA Motocross 450 Class Champion (Rookie Season), the 2010 AMA Supercross 450 Class Champion (Rookie Season), and the 2009 AMA Supercross Lites West Champion. In 2011 nationals Dungey won 3 overalls and trailed the season points leader Ryan Villopoto by just 7 points. Dungey suffered a blown engine at freestone costing him valuable points in the 2011 nationals. Dungey finished his professional mortorcross career in 2011 at the Suzuki final event at the Motocross of Nations, currently Dungey is on ktm and was in 2nd place in the 2012 fim supercross until an injury led him to no racing in Seattle. 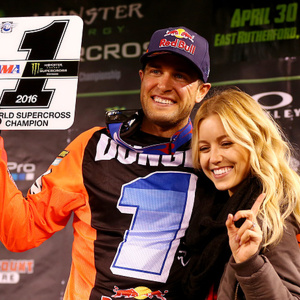