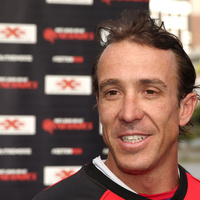 Robbie Maddison Net Worth: Robbie Maddison is an Australian motorbike stunt rider who has a net worth of $10 million. Robbie Maddison was born in Australia in July 1981. He grew up in Kiama Downs and started riding in national motocross and supercross events. Maddison won both the amateur and pro events at Bachus Marsh, Victoria. He won gold at the X Games in Australia's Wonderland in 2004 and completed 13 back flips. He was given the opportunity to break two world records in 2005. Maddison broke the world motorcycle jumping record live on ESPN in 2007 at 98.34m. He then broke his own world record twice in 2008 in Melbourne, Australia as he traveled 316 feet or 96.32m. He then traveled 342 feet 7 inches (104.42m). In another live ESPN event in 2009 he jumped 96 feet onto the Arc de Triomphe in front of Paris Las Vegas and then descended an 80 foot drop safely to ground level. In 2009 he jumped Tower Bridge in London with a backflip. In 2010 he became the first person to jump the start gantry at the Formula One in Melbourne, Austria. In 2010 Robbie performed a moto-x jump over the Corinth Canal in Greece. In 2012 he was the motorbike stunt double for James Bond actor Daniel Craig in the film Skyfall. Maddison won a Screen Actors Guild Award for best stunt ensemble in Skyfall. He also won the Taurus world stunt award for best stunt with a vehicle in 2013. Maddison has been sponsored by Red Bull, Swatch, Skullcandy, Dunlop Sport, DC Shoe Company, and many more. In 2017 he was a stunt double for Vin Diesel in the movie xXx: Return of Xander Cage.