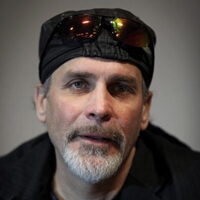 Robbie Knievel net worth: Robbie Knievel was an American daredevil and stunt performer who had a net worth of $2 million at the time of his death. Unfortunately Robbie died on January 13, 2023 at the age of 60. Robbie Knievel was born in Butte, Montana, and is the son of famed stuntman, Robert "Evel" Knievel. He began jumping his bicycle before he started kindergarten, and was performing motorcycle tricks before second grade. His first major public appearance in a stunt show was at age 8 at Madison Square Garden. He performs most of his jumps using a Honda CR500 Motocross bike. His father made many of his record-breaking jumps using a Harley-Davidson XR750, a considerably heavier bike. To date, Robbie Knievel has set 20 world records, many of which have been televised. He also starred on his own series, "Knievel's Wild Ride" on A&E. In October 2011 he performed a 150-foot jump over a row of tractor-trailer trucks. In addition to touring, he also owns Knievel's Custom Cycles, a custom motorcycle shop in Lake Hopatcong, New Jersey.