Reed Sorenson Net Worth: Reed Sorenson is an American stock car racing driver who has a net worth of $18 million. Born in Peachtree City, Georgia, in 1986, Reed Sorenson started racing quarter-midgets when he was six years old and he claimed the national title in 1997. He continued to race and appeared with the American Speed Association in 2002.

When he was 17 years old, Sorenson won the Pat Schauer Memorial Rookies of the Year Award. He made his NASCAR Nationwide Series debut in the 2004 Kroger 200. He has since appeared in close to 200 races over the course of a decade, winning his first competition at the 2005 Pepsi 300 in Nashville. Sorenson has 86 top ten finishes and four wins. He made his NASCAR Sprint Cup Series debut in 2005 at the Bass Pro Shops MBNA 500 in Atlanta. Though Sorenson has raced in more than 200 competitions in the Sprint Cup Series, he has yet to win a race in his car as of the fall of 2014, but has recorded 15 top ten finishes. In 2014, Sorenson returned to the Sprint Cup Series circuit with a full racing schedule for the first time since 2009. He is behind the wheel of Tommy Baldwin Racing's number 36 Chevrolet. 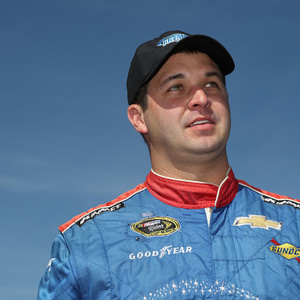