Mike Joy net worth and salary: Mike Joy is an American TV sports announcer who has a net worth of $14 million. Mike Joy was born in Chicago, Illinois in November 1949. He is the lap-by-lap voice of NASCAR coverage on Fox Sports where he is joined by Darrell Waltrip and Jeff Gordon. Joy has broadcast 40 Daytona 500s over the years. He is an expert analyst for collector car auctions on Velocity and the Discovery Channel. Joy started out as a public address announcer in Massachusetts at the Riverside Park Speedway. He then worked for NASCAR's radio network MRN Radio for 15 years from 1976 to 1990 and was the anchor of the Sprint Cup telecasts on ESPN in 1981 and TNN in 1991. Mike Joy also worked as a pit reporter for CBS. He joined Fox Sports in 1998. As an actor Mike Joy starred as Warden in the TV series North Woods Law in 2012. He made cameos in the movies Talladega Nights: The Ballad of Ricky Bobby and Logan Lucky as well as provided voice work for the film Cars 3.

Mike Joy's NASCAR salary: Every year Mike Joy earns $4 million per year to be the voice of NASCAR. 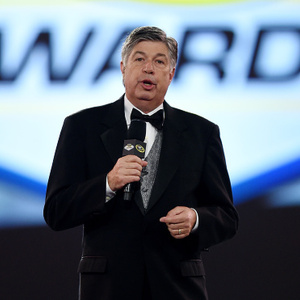