Michael Waltrip net worth: Michael Waltrip is an American professional race car driver who has a net worth of $35 million dollars. Michael Waltrip was born in Owensboro, Kentucky in April 1963. At 15 Michael asked his older brother Darrell to help him start a career in NASCAR. He also asked his father but both declined.

He started off on his own with help from his brother Bobby Waltrip racing go-karts. Michael became noticed by Dale Earnhardt and moved in with Kyle and Richard Petty. Michael started his stock-car career in 1981 and won the Mini-Modified division track championship at the Kentucky Motor Speedway. He won the series championship at the Goody's Dash Series in 1983. He was voted most popular driver on the circuit in 1983 and 1984. He made his Cup debut in 1985 at the Coca-Cola 600. He is a two time Daytona 500 winner in 2001 and 2003, as well as a two time Gatorade Duel winner in 2002 and 2005. He races the #66 car for the Michael Waltrip Racing team in the NASCAR Sprint Cup Series. His best finish was 12th both in 1994 and 1995. He has four wins and 132 top ten finishes. He has 11 wins in the NASCAR Nationwide Series, as well as a win in the NASCAR Camping World Truck Series. Waltrip serves as a pre-race analyst for NASCAR on FOX. He was a competitor in the 2011 24 Hours of Le Mans event. He has two daughters and was formerly married to Elizabeth Franks. He participated in the 2000 Boston Marathon. His 2011 book was a New York Times best-seller. In 2014, he appeared as one of the cast members in the hit ABC television series, Dancing With the Stars. 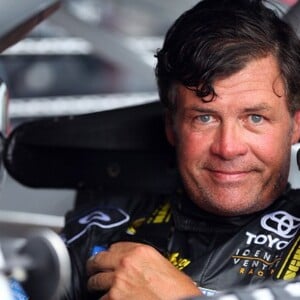