How much is Matt Kenseth Worth?

Matt Kenseth Net Worth and career earnings: Matt Kenseth is an American professional stock car racing driver who has a net worth of $60 million dollars. Matt Kenseth was born on March 10, 1972 in Cambridge, Wisconsin where he began stock car racing in 1988 at the age of 16 at Madison International Speedway. Kenseth continued on several short tracks in Wisconsin as a teenager and won track championships at Madison International Speedway, Slinger Super Speedway, and Wisconsin International Raceway. He moved to the ARTGO, American Speed Association, and Hooters Late Model touring series before getting a full-time ride in the NASCAR Busch Series. After finishing second and third in the standings, he moved up in the NASCAR Winston Cup Series. He won the series' Rookie of the Year title in 2000 and the championship in 2003. The International Race of Champions invited Kenseth to race in their 2004 season as the reigning champion and he won the season championship. In 2009, he won a rain-shortened Daytona 500 and repeated as Daytona 500 winner in 2012. He drives the No. 20 Toyota Camry for Joe Gibbs Racing in the NASCAR Sprint Cup Series full-time as well as the No. 20 Toyota Camry for Joe Gibbs Racing in the NASCAR Nationwide Series on a part-time basis. He is the father of fellow stock car racing driver Ross Kenseth. 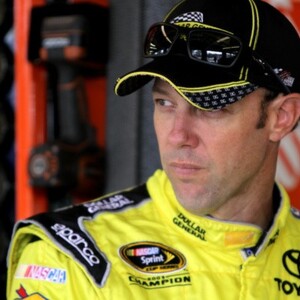