Mario Andretti net worth and career earnings: Mario Andretti is an American race car driver who has a net worth of $130 million. Mario is perhaps most famously known for being one of only two people ever to come in first place in races in Formula One, IndyCar, World Sportscar Championship and NASCAR. Andretti's name in American popular culture has become synonymous with speed, raising the bar in race car driving from the very start of his career.

Early Life: Mario Gabriele Andretti was born on February 28, 1940 in Motovun, Croatia. Andretti identifies as an Italian-born American and is one of the most successful race car drivers in the history of NASCAR. Both Mario and his twin brother Aldo both expressed a deep interest in cars at a very young age. Their mother claims that, amazingly, her young sons would sit in boxes and pretend to drive cars even before either of them one of them truly knew what a car was, much less how to operate one. Mario Andretti began to race in real cars not too long after, when the Andretti family moved to a location with a racetrack close by. From that point onward, Andretti demonstrated that he was a racer to keep an eye on, rising in the ranks of not just one racing organization, but several simultaneously.

Racing Career: The Andretti family story is akin to the idea of the American dream. Andretti and his family emigrated to the United States, where they would settle in Nazareth, located in Pennsylvania's Lehigh Valley — the entire family had only $125 to their name. Andretti would finish high school in 1959 with an original plan and aspirations to become a tradesman in welding. Andretti, ironically, would have to falsify his driver's license in order to pass for a 21-year-old. It was at this point that Andretti would enter his first amateur race. As mentioned above, Mario and Aldo were pleasantly surprised to discover that, close by their family home, a half-mile dirt racing track called Nazareth Speedway was calling their names. The twins would go on to work on a 1948 Hudson — they would race this very car in the Limited Sportsman Class. The twins utilized funds that they had earned working in their uncle's garage. Mario and Aldo would take turns practicing with the old Hudson on their Nazareth dirt dirt track. Of course, the twins did not mention this sort of thing to their parents. The twins would each chalk up two wins in their first four races. While Aldo would become seriously hurt near the end of their inaugural season, Mario would go on to earn 21 modified stock car wins in only 46 races that took place from 1960 to 1961.

Andretti would enjoy an uncharacteristically and unprecedentedly long career in race car driving. He is the only driver to be named United States Driver of the Year, his recognitions spanning over three long decades — the 1960s, 1970s, and 1980s. Andretti also happens to be one of only three drivers to claim wins when it comes to road race courses, paved oval courses, as well as dirt tracks — and Andretti reached this feat all in one season. Andretti would accomplish this four times as a race car driver. With Andrett's final IndyCar win, which took place in April of 1993, he solidified his position as the first driver to finish first place in IndyCar races across four different decades. He's also the first race car driver to win automobile races of any kind in across five decades.

Andretti won championships in NASCAR, Formula One, and more, and competed in the Le Mans 24 Hour Race for four decades. Since retiring from racing, Mario Andretti has maintained a high profile, writing a column about racecar driving and making cameo appearances in TV shows such as Home Improvement and feature films such as Pixar's Cars and the racing documentary Dust to Glory.

Awards and Accolades: During what has now become a highly heralded career, Andretti would go on to seize the 1978 Formula One World Championship, not to mention four IndyCar titles (three which were won under USAC-sanctioning and one under CART sanctioning), as well as an IROC VI title. Andretti remains the lone race car driver to ever win the Indianapolis 500 (won in 1969), the Daytona 500 (won in 1967), and the Formula One World Championship. Along with Juan Pablo Montoya, Andretti is the only driver to win a race in the NASCAR Cup Series, the Formula One series, as well as an Indianapolis 500 cup. No single American has gone on to finish first in a Formula One race since Andretti's flawless victory at the Dutch Grand Prix, which happened in 1978. Andretti has 109 total career wins — all occurring on major circuits.

Personal Life: Andretti has made it a personal point to stay active after retirement. Although Andretti is no longer a full-time race car driver, the man makes several speaker appearances to various audiences and remains a spokesman for his longtime sponsors (Texaco/Havoline, Firestone and Magnaflow). Andretti has also been a speaker on occasion for the now-defunct Champ Car World Series. Andretti is also an active vice chairman of a winery which bears his family name (Andretti Winery, located in Napa Valley, California). Andretti also owns a chain of gas stations, not to mention his own Toyota dealership located in Moon Township, Pennsylvania. Andretti stays true to his passions, owning car washes, car-care product lines, go-kart tracks, and replica cars. Since 2012, Andretti has operated as the official ambassador for the Circuit of the Americas (COTA), a role in which Andretti actively promotes Formula 1 racing awareness. 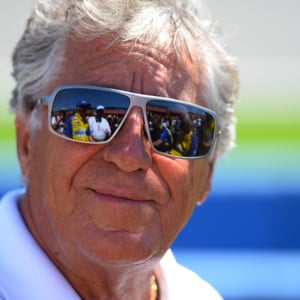