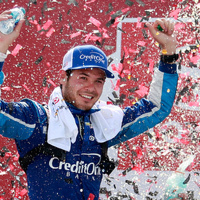 Kyle Larson net worth: Kyle Larson is an American professional stock car racing driver who has a net worth of $12 million. Kyle Larson was born in Elk Grove, California in July 1992. He has competed in the Monster Energy NASCAR Cup Series, the NASCAR Xfinity Series, and the NASCAR Camping World Truck Series. Kyle Larson drives the #42 Chevrolet Camaro ZL1 for Chip Ganassi Racing in the Monster Energy NASCAR Cup Series. He also drives the #42 Chevy Camaro for CGR in the NASCAR Xfinity Series. In 2012 he was named the NASCAR K&N Pro Series East Rookie of the Year and he was the Nationwide Series Rookie of the Year in 2013 and the Cup Series Rookie of the Year in 2014. Kyle Larson has won events including the 2011 Belleville Midget Nationals Championship, the 2012 and 2016 Turkey Night Grand Prix, the 2013 UNOH Battle at the Beach All-American, the 2015 Rolex 24 at Daytona, the 2016 Spring Showdown, and the 2016 Aspen Dental Eldora Dirt Derby.

Career Earnings: Between June 2018 and June 2019, Kyle earned $9 million. The vast majority of those earnings came from salary and winnings. That was enough to make him one the 10 highest-paid NASCAR drivers in the world.

Racist Remark: In April 2020 during a Twitch livestream, Kyle used the "n-word" when he thought no one could hear his microphone. Within 24 hours he was fired by his team, Chip Ganassi Racing. He was also dropped by sponsors like McDonald's and Credit One Bank.