Kyle Busch net worth: Kyle Busch is an American stock car racing driver and team owner who has a net worth of $80 million. Kyle Busch has earned his net worth through his racing career and ownership of his own team, Kyle Busch Motorsports. He is the younger brother of Kurt Busch.

Kyle Thomas Busch was born in Las Vegas, Nevada in May 1985. He got his first driving lesson at just 6 years old. He worked in his family's garage with his father and brother and became crew chief for his brother by 10 years old. His driving career started just after his 13th birthday. He won more than 65 races in legends car racing. He started with the NASCAR Craftsman Truck Series at 16. His older brother Kurt won the 2004 Sprint Cup Series. Kyle drives the #18 Toyota Camry in the NASCAR Sprint Cup Series, as well as the #54 Toyota Camry in the Nationwide Series, for Joe Gibbs Racing. He started Kyle Busch Motorsports, a company that has multiple tracks in the Camping World Truck Series. Kyle Busch holds several records in NASCAR, including most wins in a season.

He is married to Samantha Sarcinella and has been nicknamed "Shrub" and "Rowdy". Busch was cited for reckless driving in North Carolina in 2011, driving 128 mph.

Career Earnings: Between June 2018 and June 2019, Kyle earned $16 million. That was enough to make him the second highest-paid driver in NASCAR for the period. The vast majority of those earnings, roughly $14 million, came from salaries/winnings on the track. 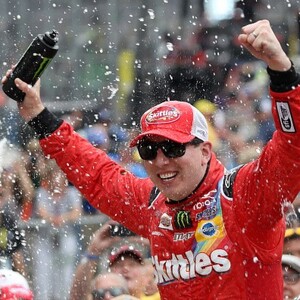