He has broken more than 20 bones and had seven teeth knocked out. He also also suffered other injuries including a steel plate in his jaw and he damaged a blood vessel in his brain. Kenny Bartram won the 2002 WFA Freestyle in Cleveland, Ohio. He has 10 X Games and Gravity Games medals including four gold, two silver, and four bronze. He signed with KTM in 2009 and has appeared in video games. 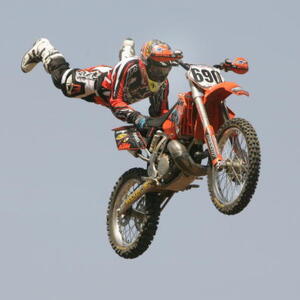