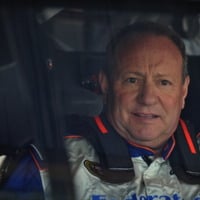 Ken Schrader net worth: Ken Schrader is an American racecar driver who has a net worth of $25 million. He raced in the NASCAR Sprint Cup Series from 1981-2013 and currently races on local dirt and asphalt tracks around the country while driving part-time in the ARCA Racing Series. He was born in Fenton, Missouri in 1955 and began his racing career in Missouri. During the 90s and into the 2000's, Schrader was running as many as 100 races among many types of racing, including NASCAR's national and regional touring series, ARCA, short track, and dirt track races. During his career he has raced in over 760 races over 29 years. He has won numerous awards including the 1985 Winston Cup Series Rookie of the Year, the 1980 USAC Stock Car Rookie of the Year award, and the National Dirt Late Model Hall of Fame Sportsman Award in 2009. He was the USAC Silver Crown Champion in 1982, the USAC Sprint Car Champion in 1983, the Busch Clash Winner in 1989 and 1990, and the Daytona 500 pole winner in 1988, 1989, and 1990. He owns a dirt late model and dirt open wheel-modified car. Both of these cars, along with his Camping World Truck Series and ARCA series cars, are sponsored by Federated Auto Parts. He owns I-55 Raceway in Pevely, Missouri, and is co-owner of Macon Speedway, near Macon, Illinois, along with Kenny Wallace, Tony Stewart, and local Promoter Bob Sargent. Schrader is married to Ann Schrader and they have two children, Dorothy and Sheldon. The family currently resides in Concord, North Carolina. Even after retiring he still competes occasionally and finished 10th at the 2017 Little 500 sprint car race.