Kasey Kahne Net Worth and career earnings: Kasey Kahne is an American NASCAR driver who has a net worth of $50 million dollars. Kasey Kahne was born April 10, 1980 in Enumclaw, Washington where he began racing open wheel sprint cars at Deming Speedway at 17 in Deming, Washington, before moving up to Skagit speedway in Alger, Washington, and then he moved to USAC.

Kahne currently drives the No. 5 Farmers Insurance Group/Quaker State Chevrolet SS for Hendrick Motorsports in the Sprint Cup Series. Kahne is also active in charitable work and is a member of the President's Council on Service and Civic Participation. He also owns his own race team, Kasey Kahne Racing, that competes in the World of Outlaws series, fielding three cars, for Daryn Pittman, Cody Darrah, and Brad Sweet. His team also fields a car in the USAC Sprint Car Series for Brady Bacon, and in USAC midgets for Brad Sweet. Kahne is a two-time Skagit Speedway winner of the Annual Jim Raper memorial Dirt Cup (2002 and 2003), and holds the current record for the fastest lap at Skagit. Kahne was featured in the premiere episode of the 2006 Biography Channel series, "Driven to Win". This 30-minute program covered Kahne's childhood and entry into NASCAR, as well as his 2004 Rookie of the Year season and his first win in 2005. He was also featured in two episodes of the second season of "NASCAR 360" on the FX Network. 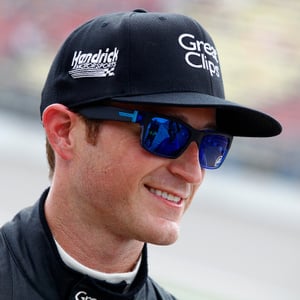