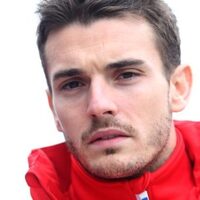 Jules Bianchi Net Worth: Jules Bianchi was a French racing driver who had a net worth of $10 million. Tragically, Jules died on July 17, 2015 after suffering a sever injury in a crash at the Japanese Grand Prix in October 2014.

Jules Bianchi was born in Nice, France in August 1989. Jules was the grandson of three-time GT World Champion Mauro Bianchi, as well as the grandnephew of 1968 24 Hours of Le Mans winner Lucien. Jules made his Formula One debut in 2013 for Marussia. He had previously raced in Formula Renault 3.5, GP2 Series, and Formula Three. He was a test driver at Ferrari in 2011 and did so for Force India the next season. He made his debut for Marussia in 2013 and finished 15th in his first race in Australia. Bianchi's best result of the season was 13th at the Malaysian Grand Prix. He scored his and his team's first points at the Monaco Grand Prix in 2014.

In October 2014 Jules Bianchi suffered severe head injuries while involved in a crash at the Japanese Grand Prix at Suzuka Circuit. Due to the serious brain damage, he had to undergo emergency surgery and was placed into an induced coma. He stayed comatose until his death on July 17, 2015 when he succumbed to the injuries. With the tragic loss of his life, Bianchi became the first Formula One driver to have died by injuries sustained during a Grand Prix since Ayrton Senna in 1994.