How much is John Andretti Worth?

John Andretti Net Worth: John Andretti was an American race car driver who had a net worth of $20 million at the time of his death. John died on January 30, 2020 at the age of 56 after a battle with cancer.

Born in Bethlehem, Pennsylvania, in 1963, John Andretti comes from a family heavily involved in the racing industry. Andretti made his NASCAR Nationwide Series debut in the 1998 Goody's 300 in Daytona; he has four top ten finishes and no wins spanning 37 races in three years. His NASCAR Sprint Cup Series debut came in the 1993 Tyson/Holly Farms 400 in North Wilkesboro. He has two wins and 37 top ten finishes over 393 races in 17 years; Andretti last raced in the Sprint Cup Series in the 2010 Daytona 500. His first win came at the 1997 Pepsi 400 in Daytona, while his last victory was in the 1999 Goody's Body Pain 500 in Martinsville. Andretti also had a ten-year IndyCar Series career; he made his debut at the 2007 Indy 500 and last raced in the 2011 Indy 500. He has never won in the IndyCar Series and had his career best finish in 2008 at 30th place. He also participated in the Champ Car series, running 73 races in eight years with one win at the 1991 Gold Coast Indy Car Grand Prix in Surfers Paradise. Andretti, a graduate of Moravian College, has a son who is involved in USAC midget racing. 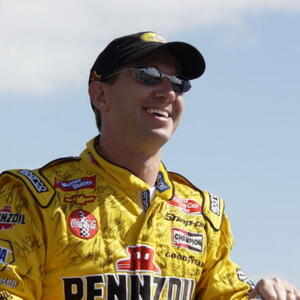