Joey Logano Net Worth: Joey Logano is an American stock car racing driver who has a net worth of $44 million. Joey Logano was born May 24, 1990 in Middletown, Connecticut. He holds the distinction (to date) as the youngest Nationwide Series winner (at barely 18 years old) as well as the youngest Spring Cup Series winner (at barely 19 years old). He currently drives the No. 22 Ford Fusion full-time in the NASCAR Sprint Cup Series and the No. 22 Ford Mustang in the Nationwide Series for Team Penske. He previously drove for Joe Gibbs Racing from 2008 to 2012, collecting 2 wins, and 41 top-10 finishes.

His career in racing began in the '90s when Logano was still in elementary school. His first major NASCAR win came during the Meijer 300 at Kentucky Speedway in just his third start in the 2008 Nationwide Series. Throughout the years, Logano continued to prove a dominant force in the Nationwide Series as well, including a record-setting 2012 season that saw him lead all Nationwide Series drivers with nine wins, six poles and 1,065 laps led while competing in 22 of 33 races. Since joining the Nationwide Series in 2008, Logano has earned 21 wins, 23 poles (good for sixth on the all-time list), 61 top-fives and 98 top-10s in just 125 starts. He was awarded the Sprint Cup Rookie of the Year Award in 2009 after becoming the youngest winner ever of any of NASCAR's top racing series. He is currently ranked 24th on the Sprint Cup circuit and 92nd on the Nationwide circuit. Joey Logano has also made cameo appearances on television shows such as Man v. Food Nation, American Idol and Disney XD's Lab Rats.

Career Earnings: Between June 2018 and June 2019, Joey Logano earned $11 million. The vast majority of those earnings, roughly $9.5 million, came from salary/winnings from races. The remainder came from endorsements. That made him the 5th highest-paid driver in NASCAR. 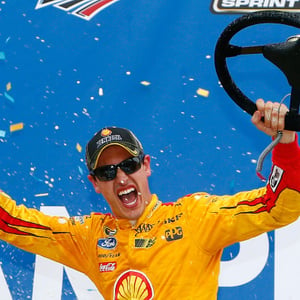