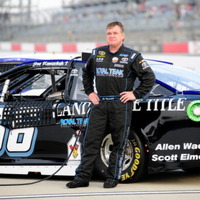 Joe Nemechek Net Worth: Joe Nemechek is an American stock car racing driver who has a net worth of $30 million. Joe Nemechek was born in Lakeland, Florida, in 1963. He started racing as a teenager and appeared in his first Busch Series race in 1989. He earned Busch Series Rookie of the Year honors in 1990, two years after being named the USAR Rookie of the Year. Nemechek went on to be named the Most Popular Driver in the Busch Series in back-to-back years in 1992 and 1993. As of the fall of 2014, Nemechek has appeared in 425 NASCAR Nationwide Series races in the last 25 years, earning 126 finishes in the top ten to go along with 16 wins. He last won at the 2004 Mr. Goodcents 300 held in Kansas. He finished 2013 in 19th place. Nemechek made his NASCAR Sprint Cup Series debut in 1993 at the Slick 50 300 in New Hampshire. He has since run 666 races in 22 years with the Sprint Cup Series, winning four times, most recently at Kansas' 2004 Banquet 400, and finishing in the top ten 62 times. His best finish in the Sprint Cup Series came in 2000 when he ended the year in 15th place.