Jeff Green Net Worth: Jeff Green is an American stock car racing driver who has a net worth of $20 million. Born in Owensboro, Kentucky, in 1962, Jeff Green was involved in racing from a young age, and his two brothers would also grew up to race professionally with NASCAR.

He won the 1990 Nashville Speedway USA championship and soon made his way into NASCAR. He made his NASCAR Nationwide Series debut at the 1990 Autolite 200 in Richmond. He has since appeared in close to 400 races over nearly 25 years. He won his first race at the 1997 Las Vegas 300; Green has 16 wins and 127 top ten finishes. He later began racing in the NASCAR Sprint Cup Series at the 1994 Miller Genuine Draft 400 in Richmond. He has since participated in more than 265 races with 16 top ten finishes, two poles and no wins. His best finish was in 2002 when he placed 17th. Green won the 2000 Busch Series and was a 2003 Daytona 500 pole winner. He also took part in the NASCAR Camping World Truck Series, appearing in first race at the 1997 Virginia is for Lovers 200 in Richmond. Green has been in ten races with one top ten finish in the series. Green and his brother, Mark, are the founders of The Green Foundation, a non-profit organization designed to help those suffering from potentially deadly sicknesses and injuries. He lives with his wife, Michelle, in North Carolina. 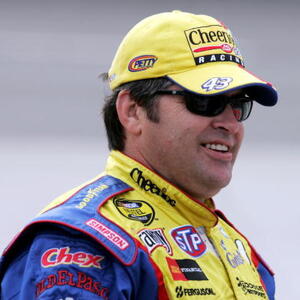