Jean Alesi Net Worth: Jean Alesi is a French race car driver who has a net worth of $50 million. Jean Alesi was born Giovanni Alesi in Avignon, Vaucluse, France, in 1964. He was an up-and-coming racer before he made his Formula One career debut in the 1989 French Grand Prix, driving a Tyrrell-Ford.

Alesi participated in Formula One from 1989 until 2001, appearing in more than 200 races with 201 starts. He failed to win a championship, but won one race and made it to 32 podiums. His first and only win came at the 1995 Canadian Grand Prix. His last appearance was at the 2001 Japanese Grand Prix. Alesi also appeared in the 24 Hours of Le Mans in 1989 and 2010 with Team Schuppan and AF Corse. He ran one IndyCar Series race with Fan Force United at the 2012 Indy 500, but did not place. In 2006, he won the Chevalier de la Legion d'honneur. Alesi is well-known for his famed white, black and red helmet, which paid homage to Elio de Angelis. He later changed his helmet to silver in 1999. Alesi lives near Avignon with his wife, Japanese model and actress Kumiko Goto. They are avid wine connoisseurs, own a vineyard, and have four children together. 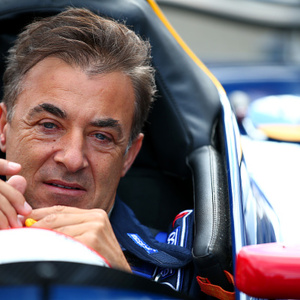