How much is Jason Line Worth?

Jason Line net worth: Jason Line is an American racing driver who has a net worth of $5 million. He is perhaps best known for his more than 50 NHRA career wins.

Jason Line was born in Wright, Minnesota in July 1969. He served in the United States Air Force from 1987 to 1991. Line served as Chief Dynamometer Engine Specialist for the Joe Gibbs NASCAR team. In 1985 he competed in his first NHRA race where he drove a 1968 Chevelle. He became a racing fan growing up just a few miles from the Brainerd International Raceway. He learned how to repair engines from his father who was a mechanic. Line bought a 1970 Buick GS and worked on nit and took it to the track. In 2012 he broke the A/Modified Production Speed Record of 191 mph when he achieved 225 mph at Bonneville Flats. Jason Line won the NHRA Pro Stock Championship in 2006, 2011, and 2016 after being named 2004 NHRA Rookie of the Year. 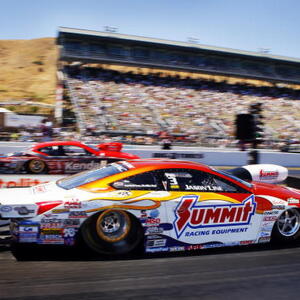