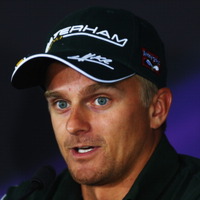 Heikki Kovalainen net worth and career earnings: Heikki Kovalainen is a Finnish racing driver who has a net worth of $55 million dollars. Heikki Johannes Kovalainen was born in Suomussalmi, Finland in October 1981. He competed in kart racing from 1991 to 2000. In 1999 and 2000 he finished as runner-up in the Finnish Formula A championship. He won the Nordic championship and Paris-Bercy Elf Masters in 2000. He also finished third in the World Formula Super A Championship that year and was named Finnish Kart Driver of the Year. He started his career in the British Formula Renault Championship. He also won the Rookie of the Year Award. In 2002 he moved up to the British Formula Three Championship. In 2003 Heikki moved to the World Series by Nissan. He entered the GP2 Series in 2005. He raced for Renault from 2004 to 2007. Kovalainen drove for McLaren in 2008 and 2009 and then for Lotus is 2010 and 2011. In 2012 he joined Caterham. Heikki was won the World Series by Nissan championship and was the runner-up in the GP2 Series. He also finished second in the Japanese Grand Prix. He won at Silverstone and Hungaroring and became the 100th driver to win a Formula One Grand Prix. Between salary and endorsements, Heikki Kovalainen earns between $5 and $10 million dollars per year.