Graham Rahal net worth: Graham Rahal is an American race car driver who has a net worth of $15 million. Graham Rahal was born in Columbus, Ohio in January 1989. His father Bobby Rahal won the 1986 Indianapolis 500 and is a part owner of the team Rahal Letterman Lanigan Racing which Graham competes on.

Graham Rahal has run in more than 150 IndyCar Series races and finished 4th in 2015. His first win was at the 2008 Honda Grand Prix of St. Petersburg. He has also competed on the Champ Car circuit as well as at the Champ Car World Series, Champ Car Atlantic, and Star Mazda Championship. Graham Rahal won the 24 Hours of Daytona in 2011. His wife is Courtney Force and he is the brother-in-law of Ashley Force Hood, Brittany Force, Robert Hight, and the son-in-law of John Force. He owns Graham Rahal Performance which is an auto tuning and parts shop and is also the junior partner with Bobby Rahal Automotive Group which is a network of car dealerships. 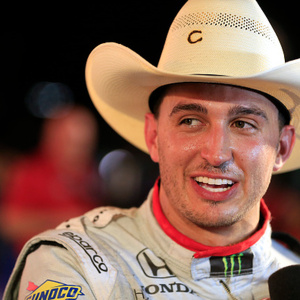