Evel Knievel Net Worth: Evel Knievel was an American daredevil motorcyclist, painter and entertainer who had a net worth of $3 million. Evel Knievel wasknown for his ambitious and risk-taking motorcycle jumps. Over his career, he did over 75 ramp-to-ramp jumps. In 1999, Knievel was inducted into the Motorcycle Hall of Fame. He passed away in 2007 at the age of 69.

Early Life and Career Beginnings: Evel Knievel was born as Robert Craig Knievel in 1938 in Butte, Montana. He was the first of two children of Ann Marie and Robert E., who were of Irish and German ancestry, respectively. When their parents divorced in 1940, Knievel and his brother Nic were raised by their paternal grandparents. As a teenager, Knievel attended Butte High School, but left after his second year; he subsequently landed a job as a diamond drill operator for the Anaconda Mining Company, working in the copper mines. Eventually, he was promoted to surface duty, but was fired when he did a wheelie on the earth mover he drove, and took out Butte's main power line in the process.

A lifelong thrill-seeker, Knievel entered into many local ski jumping events and professional rodeos, and won championships along the way. In the late 50s, he joined the United States Army, and was a pole vaulter on the track team. He also tried out with the Eastern Hockey League's Charlotte Clippers, but decided against being on a traveling team. After having his first child, Knievel started the Sur-Kill Guide Service, a hunting service, to help support his family. In 1961, he hitchhiked from Butte to Washington, DC to raise awareness about the harmful culling of elk in Yellowstone. Upon his return home, he joined the motocross circuit, and ended up breaking his collarbone and shoulder. A career change led to him selling insurance, at which he was successful.

First Stunt Performances: When the insurance company he worked for refused to promote him to vice president, Knievel quit his job. He subsequently moved with his family to Moses Lake, Washington, where he opened a Honda motorcycle dealership. After the dealership closed due to the difficulty of selling Japanese imports, Knievel went to Sunnyside, Washington to work at the motorcycle shop of Don Pomeroy. It was Jim Pomeroy, Don's son, who taught Knievel how to do a wheelie while standing on the seat of his bike.

Inspired by a Joie Chitwood daredevil auto show he had seen as a youth, Knievel set up his own stunt show with his motorcycle. He performed a few wheelies, and then jumped over a 20-foot-long box of rattlesnakes, plus a pair of mountain lions. In order to make more money, Knievel partnered with sponsor Bob Blair, the owner of ZDS Motors, Inc. and distributor for Norton Motorcycles. In January of 1966, Knievel debuted with his team of daredevils at the National Date Festival in Indio, California. A massive success, Knievel went on to book subsequent shows in Hemet and Barstow, and then went from town to town as a solo act. He began jumping cars in addition to motorcycles, and suffered a major injury after a particularly large jump attempt in Missoula, Montana. After recovering, he cleared 15 cars in Gardena, California, but then weathered more serious injuries in Graham, Washington. In 1968, Knievel achieved national exposure when he appeared on "The Joey Bishop Show."

Major Jumps: One of Knievel's first majorly publicized jumps was at Caesars Palace in 1967, where he attempted to clear 141 feet over the fountains; it was his longest-ever motorcycle jump attempt. He ended up crashing, and suffered injuries that kept him in the hospital for weeks. The crash and recovery, and the televised footage of the jump, made Knievel more famous than ever. He subsequently attempted to jump 15 Ford Mustangs in Scottsdale, Arizona, but crashed again. However, from August to October of 1968, Knievel was landing successful jumps almost every week.

In 1971, Knievel set a world record by jumping over 19 cars in Ontario, California. Although he had planned to jump the Grand Canyon, he knew the government would strictly forbid it. Instead, he focused on jumping Idaho's Snake River Canyon, which he attempted in 1974. The next year, he did more motorcycle jumps on ABC's "Wide World of Sports," including attempts at London's Wembley Stadium, King Island in Ohio, and the Seattle Kingdome. After an aborted jump over a tank of live sharks in Chicago in 1977, Knievel retired from major performances. 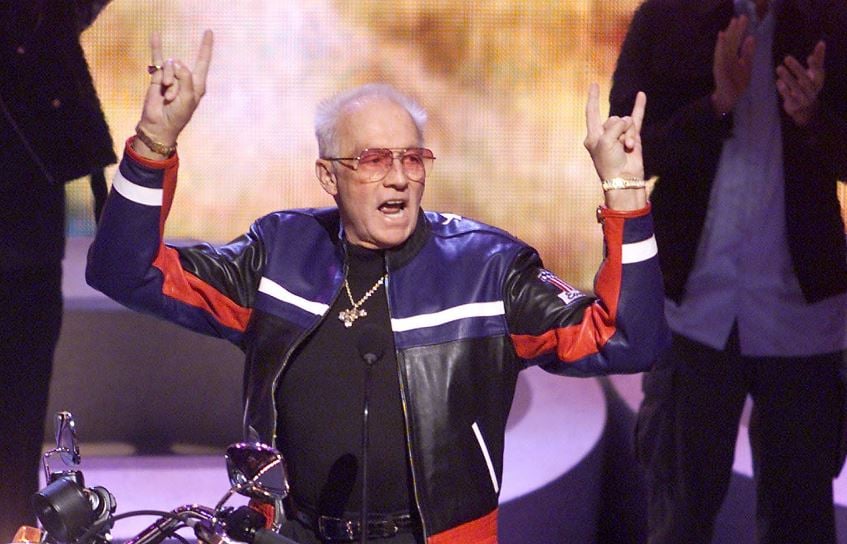 Post-Performance Years: Following his last stunt show in 1980, Knievel made appearances at smaller venues to help foster the career of his son, Robbie. He served as Robbie's touring companion for a while, making his last on-tour appearance in Hollywood, Florida in 1981. For the remainder of the decade, Knievel drove across the country selling works of art he allegedly created. In the 90s, he helped market brands including Harley-Davidson, Little Caesars, and Maxim Casino.

In 2003, Knievel signed over rights to composer Jef Bek to make a rock opera based on his life. In 2005, Knievel promoted his last "ride" at the Harley-Davidson dealership in Milwaukee, to benefit victims of Hurricane Katrina. Due to suffering a mild stroke, he never actually rode.

Personal Life and Health Struggles: Knievel married Linda Joan Bork in 1959; they had four children, Kelly, Robbie, Tracey, and Alicia. The pair separated in the early 90s before divorcing in 1997. In 1999, Knievel married Krystal Kennedy, whom he later divorced in 2001.

In the late 90s, Knievel received a life-saving liver transplant while suffering from Hepatitis C. In 2005, he was diagnosed with a terminal lung disease that required him to be on a supplemental oxygen supply 24/7. That year, he also had two minor strokes. In November of 2007, Knievel passed away at his residence in Clearwater, Florida. 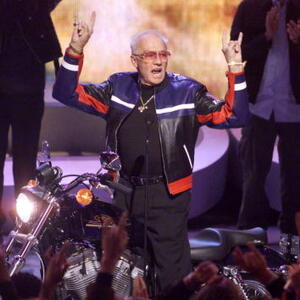